Union College is committed to providing a safe living and learning environment in which every person is valued and respected, inclusion is assured, and free expression and debate are encouraged. The College accepts the task of educating the next generation of leaders to understand and appreciate the ideas and opinions generated by an increasingly global community. The Policy Prohibiting Bias Acts establishes a mechanism for addressing situations involving a real or perceived bias act. In such an instance, the College desires to proceed thoughtfully, providing support to all of those affected, while also affirming that Union values differences, free expression, and debate as sources of strength for the College community.

This policy outlines the guidelines for reports and responding to bias acts for students, the Student Affairs Office, and others in the College community. With this policy in place, administrators and staff will be better prepared to provide leadership in effectively addressing bias acts. The goal of the policy is to set forth the procedures to be followed when bias acts (or perceived bias acts) occur and to promote a climate of respect. This policy is not intended to be used as a means of censorship or to limit in any way dialogue and the free expression of opinions and ideas. Specifically, this policy establishes:

What is an Incident of Bias at Union College?

Under Union’s specific definition, a bias incident is action taken that one could reasonably and prudently conclude is motivated, in whole or in part, by the alleged offender’s bias against an actual or perceived aspect of diversity, including, but not limited to, age, ancestry or ethnicity, color, creed, disability, gender, gender identity or expression, height, immigration or citizenship status, marital status, national origin, race, religion, religious practice, sexual orientation, socioeconomic status, or weight.

What is a Hate Crime?

Under federal, state, and local laws, a hate crime is defined as any criminal offense or attempted criminal offense that one could reasonably and prudently conclude is motivated, in whole or in part, by the alleged offender’s bias against an individual’s actual or perceived age, ancestry or ethnicity, color, creed, disability, gender, gender identity or expression, height, immigration or citizenship status, marital status, national origin, race, religion, religious practice, sexual orientation, socioeconomic status, or weight.

Union College may respond to bias acts through education. Bias acts (or perceived bias acts) will be addressed by the College on a case-by-case basis.

If a student with a disability needs a reasonable accommodation in order to participate in any aspect of the student conduct process, then the student must submit a request through the Accommodative Services.

Attention to the complainant and community impacted by a bias act:

When a bias act (real or perceived) has occurred, immediate attention will focus on the well-being of the complainant and the College community members impacted by the incident.

Attention to the respondent:

When a bias act has occurred and a student has been identified as the respondent, they will be treated fairly.

If Referred to Law Enforcement Agency:

The following procedures, to the extent reasonably practicable under the circumstances, are to be applied upon an incident occurring:

Union College's Response After a Bias Act Has Been Reported

All reported bias acts will be responded to in an efficient and professional manner taking into account the impact on the target and the Union College community. An incident response will incorporate, to the extent appropriate, input from the target on their needs and thoughts on how to best address the matter.

Addressing the Needs of the Complainant:

Addressing the Needs of the Respondent:

The Director of Community Standards (or designee) will address the needs of the respondent. He/she will make referrals to appropriate College resources.

Addressing the Needs of the Union College Community:

The Bias Response Team will work closely with the Dean of Students, the residential staff, and relevant staff throughout Student Affairs to assess the needs of the community affected most directly by the bias act. Determination of what educational response is appropriate (e.g., engaging students in peer dialogue and reflection on issues regarding inclusiveness and civility) will be addressed.

By a Law Enforcement Agency:

If an incident has been referred to a law enforcement agency (e.g., Schenectady Police Department, District Attorney, etc.), it will be assumed that an investigation by that agency will be conducted and Union will follow its non-interference policy and allow the independent investigation to occur.

Informal procedures are designed to assist the parties to reach a mutually agreeable resolution.

Mediation sessions will be held only if the complainant and the respondent both agree to mediate and if the Dean of Students determines that mediation is appropriate under the circumstances. The Dean of Students will act as mediator or will designate another person to act as mediator. The goal of mediation is to facilitate the parties’ discussions with each other such that a mutually acceptable resolution can be reached. At any point in the process, or if no mutual resolution is reached, the complainant may move the complaint to the formal adjudication process described below.

In certain situations, a formal understanding is reached between the parties. This agreement is formalized in writing and is subject to approval by the Dean of Students or their designee. The terms may include a pledge that the parties will have no further contact with each other, known as a “No Contact Agreement.” Once a student has signed a contractual agreement, it may not be revoked, and the terms may not be appealed. A student’s failure to adhere to any term of the agreement may result in referral to the Dean of Students (or designee) as set forth under the Student Conduct Code, Reporting and Procedures.

Formal procedures are designed to determine the merits of the allegations through adjudication and, where appropriate, to determine a disciplinary consequence for the respondent and are outlined in the Student Conduct Code.

The appeal process is the same as that described in the Student Conduct Code.

At the Discretion of the Dean of Students

Union College respects the dignity and rights of each of its students.

The complainant, a student who reports a bias incident, is entitled:

The respondent, a student who is accused of a bias incident, is entitled:

Union prohibits retaliation against any person who files a complaint of a bias activity, participates in an investigation, or opposes an alleged bias activity.

It is a violation of these procedures to file a bias activity complaint for the purpose of injuring the reputation or causing harm to another person. Without minimizing the injury that can be suffered by the complainant, the College also recognizes that the filing of a bias activity complaint can have serious consequences for the person accused. That person, too, has rights that must be preserved and protected. Therefore, any person who abuses these procedures by knowingly filing a false complaint will be subject to discipline if the Dean of Diversity and Inclusion/Chief Diversity Officer determines that the complaint was filed in bad faith. This provision is not meant in any way to discourage legitimate complaints.

This form is anonymous, and reporters can include as much information as possible so as to effectively respond to issues on campus. Reporters may also include photos and other visual evidence. Reports are sent to the Dean of Diversity & Inclusion and Chief Diversity Officer. 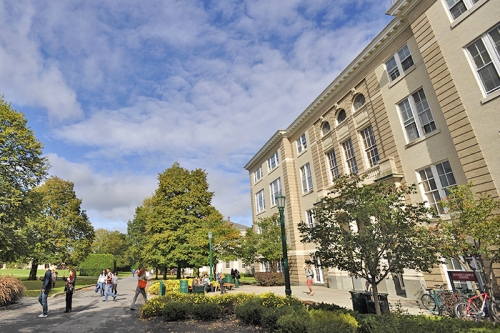