The Inauguration of David R. Harris 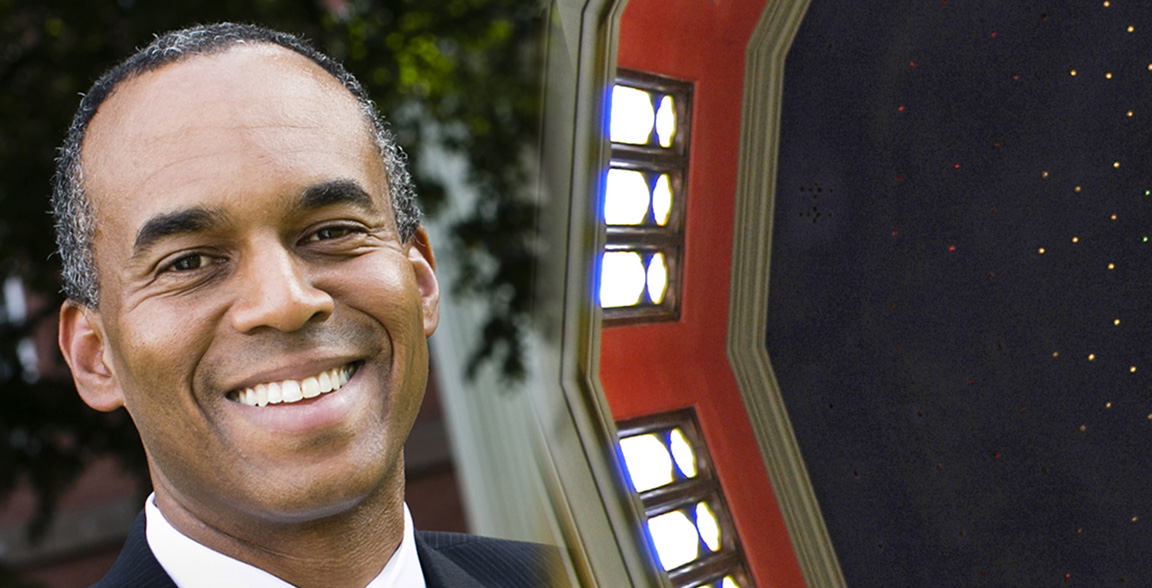 The 19th president of Union College

Standing before a crowd of hundreds of students, faculty, staff, alumni and distinguished guests gathered on Hull Plaza, David R. Harris was inaugurated Saturday as the 19th president of Union College.

A former provost and senior vice president at Tufts University, Harris, 49, was officially installed by John E. Kelly III ’76, chair of the College’s Board of Trustees. Kelly presented Harris with the school medallion and the seal of Union University. Harris also is the chancellor of Union University.

“Last September,” Kelly said, “as our search committee embarked on a journey to identify our next president, we sought a teacher with a passion for the broad and deep education that is a hallmark of Union, a scholar dedicated to the idea that differences make a community stronger, and an administrator who energetically champions the role of the College in serving our communities. We were truly inspired when we met David Harris.”

In his inaugural address, Harris shared his vision for how the College can chart its course forward, particularly during these uncertain times, with many wondering what the implications of inequality, climate change, globalization, and other challenges are for America and the world.

Guided by the College’s motto, “Under the laws of Minerva, we are all brothers and sisters,” Harris pointed out that the Roman goddess is primarily associated with wisdom.

He cautioned that a focus on wisdom doesn’t mean there is little value in data, information or knowledge.

He emphasized the need for students to continue to pursue a well-rounded education, with course work in the arts and humanities, the social sciences, the sciences and engineering. Students also must also be exposed to a range of theories, perspectives and methods. He said they must learn how to make an argument and how to tell if a point has been proved.

“The goal of a Union College education is not to enter with a life plan and avoid anything that could possibly disrupt it,” he said. “Rather, the point is for students to find out who they want to be by exploring many paths. A Union education must provide our students with the skills, experiences and judgment; in short, the wisdom to face whatever comes their way.”

Similarly, he said, faculty should be supported and encouraged to learn new approaches or form new partnerships to achieve their research and teaching goals, a theme of Friday night’s academic symposium.

He cited examples of faculty who have moved beyond the familiar to develop research and testing that extend beyond narrow knowledge.

“Encouraging faculty breadth, while not losing sight of the imperative for disciplinary depth, is critical to the future of the college,” he said.

In the pursuit of wisdom, Harris, a sociologist, said the campus community must learn to become more comfortable being uncomfortable. This commitment is part of Union’s institutional heritage extending to its founding in 1795 as the first non-denominational college.

“Our name refers to the coming together of people from several faiths to form this new college,” he reminded the audience. “The founders did not stay in their cultural comfort zones, as did the founders of most other colleges at the time. Through experience they discovered what it meant to be a leading college without a denominational affiliation.”

To follow the founders’ lead or what he called the Union College Challenge, Harris made two commitments for the fall term. First, he will add a center-right podcast each week to his regular list of preferred podcasts from outlets such as NPR, the New York Times or the Washington Post, and he will post his reflections online. This will push him to help better understand how others see the world, and sharpen and perhaps change, some of his perspectives.

Second, he will commit to taking at least three yoga classes a month. Physically active, Harris said he couldn’t imagine spending his workout time doing poses in a room. But as he has gotten older, his wife, Anne, has encouraged him to try yoga.

Harris challenged the audience to consider how they might stretch themselves. He asked what they could pursue in their studies, work or personal life that will push them in a healthy and responsible way. He plans to formalize his campus-wide challenge in the coming days.

“I suspect that through this formalization of the Union College Challenge, we will all become better adherents to the laws of Minerva, and see benefits personally and in our community,” he said.

Returning to the College’s motto, Harris noted that it refers to brothers and sisters and not men and women. One is about individual pursuits, he said, but the other is about relationships. To succeed at Union, and to pursue wisdom, one cannot go it alone.

“We must learn from one another and the disparate paths that have led us to this special place,” he said. “We must ask for help from one another when times are tough, and offer support and guidance when we see someone struggling. We must not forget that the connections we make here will be there for us in the years ahead, and that we have an obligation to do what we can to better this place and support those who follow us. Like brothers and sisters, our connection to the Union community is forever.”

In shaping his vision, Harris said he read the inaugural addresses of many of his predecessors. He noted that with the benefit of hindsight, laying out a vision requires humility because none of his predecessors knew what the College and its graduates would face in the years ahead.

At the beginning of his address, Harris referenced the distinction of being the first person of color to serve as president of Union in its 223-year history.

“In acknowledging what is clear when you look at me and the portraits of my predecessors, we appreciate not only how far Union and society have come, but we are also reminded of how far we have to go,” he said. “As we have seen at the national level, whether a barrier has been punctured or broken is sometimes only clear with time.

He also explained the purpose of this weekend’s inauguration and related events.

“This is a celebration of Union College—what it has been, what it is now and what it can be,” he said. “It is also a celebration of you and all of the other people who have shaped this College for nearly as long as the United States has existed. What it is not is a coronation. The president of Union College is the leader of a community. There is much he can decide, but his authority is not absolute and his perspectives should be questioned, albeit respectfully and constructively.”

Biddy Martin, president of Amherst College, and a colleague of Harris’ at Cornell, cited the president’s leadership style. “David Harris is courageous. He has one of the liveliest, most creative and synthetic minds I have ever known.” She also cited his ability to cross boundaries to connect people with new ideas. “He connects progress with people,” she said.

Members of Harris’s family, including his wife, Anne, and their three daughters, joined in Saturday’s celebration, with Mrs. Harris making a surprise appearance at the lectern.

A former high school English teacher and preschool teacher, Anne Harris recalled meeting her future husband in the fall of 1988 when both were students at Northwestern University. As time passed, she said, “I realized he was a person of integrity. He cared about the treatment of others … He wasn’t afraid to try something new, or to fail, and to learn from that failure and build on that. He challenged the status quo and always tried to do the right and just thing.

“For the past 30 years, all of the attributes I observed when he was 19 years old have stayed constant and true.”

Guests at the inauguration included delegates from dozens of colleges and universities across the country. Greetings were offered by a number of faculty, staff, student and alumni representatives, along with community leaders. They included Kathryn Stefanik Barry ’01, president of the Alumni Council; Michael Stalteri ’19, president of Student Forum; Francis M. Ramirez de Cueva, staff member and parent of a 2014 graduate; Gretchel Hathaway, dean of Diversity and Inclusion and chief diversity officer; Mary Carroll ’86, the Dwane W. Crichton Professor of Chemistry and chair of the Faculty Executive Committee; Gary McCarthy, mayor of Schenectady; state Sen. James Tedisco ’72; and Anthony P. Monaco, president of Tufts University.

Before the ceremony began, Harris told guests about an early-morning rehearsal of his inaugural address in Memorial Chapel, which is lined with the portraits of the previous 18 Union presidents. “They didn’t say anything,” he quipped.

The 90-minute ceremony opened with remarks from William A. Finlay, College marshal and professor of theater. It concluded with a pair of musical selections performed by a student choir: Ode to Ole Union and Earth, Wind and Fire’s 1975 testament to the healing power of music, Sing A Song.

Following the ceremony, a gala open to all was to be held in Union’s historic Jackson’s Garden from 5:30 p.m. to 8 p.m., with fireworks on Rugby Field at 9 p.m.

Other inaugural events included an academic symposium on Friday night in the Nott Memorial, “Constructive Engagement Across Perspectives: What We Know and What We Do,” featuring Scott E. Page, author of “The Diversity Bonus” and the Leonid Hurwicz Collegiate Professor of Complex Systems, Political Science and Economics at the University of Michigan.

On Sunday morning, Harris, an avid cyclist, will lead a 13-mile community bike ride from campus along the Mohawk-Hudson Bikeway. 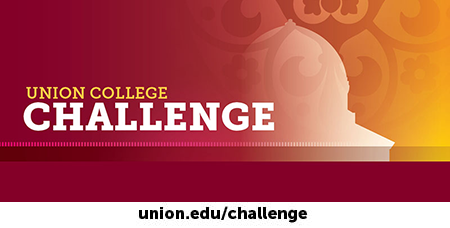