The Chinese major at Union offers a unique opportunity to become immersed in the world's most widely spoken language and one of its most fascinating cultures.

Some 885 million people speak Mandarin Chinese today. As a Union College Chinese major, you will develop your speaking, listening, reading and writing skills in highly individualized settings. Beyond the language sequence, courses will range from an exploration of Chinese literature, cinema, and gender and sexuality to "The New Wall of China," an interdisciplinary overview of the cultural, historical and artistic attributes of a region in China whose geo-political landscape has been dramatically shaped by the construction of the Three Gorges Dam.

Outside the classroom, you'll be exposed to film series and speakers, as well as gatherings of the Chinese Language Table in Reamer Campus Center. The Asian Student Union sponsors numerous events and discussions about current Asian and Asian American issues. Union students also get involved in the annual Pan-Asian American Workshop with other local colleges. And those with a passion for Asian culture may live with like-minded students (typically 8-10 residents) in Thurston House, a popular theme house.

You can experience China firsthand on Union's fall term abroad in Shanghai through CET Academic Programs. The course of study includes electives, intensive language and possible internship placements. Other outstanding study abroad options for the Chinese major at Union include faculty-advised independent study and Union's mini-term in Tianjin, which focuses on traditional Chinese medicine. 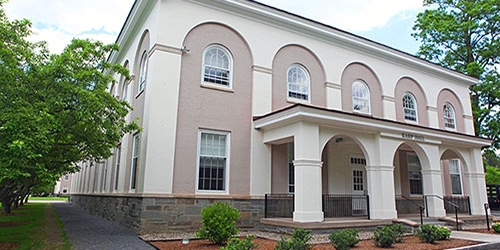 A sampling of courses

The Changing Face of China

The New Wall of China

An overview of dams and development, with specific attention to the sociocultural, historical, economic and environmental attributes of a region in China whose geopolitical landscape has been dramatically impacted by the Three Gorges Dam.

Chinese for the Term Abroad

This introduction to Chinese language, combining Basic Chinese I and culture components is open to students going on the term abroad as well as those with a general interest in learning Chinese.

Students who graduate with proficiency in Chinese have a range of exciting career options and a leg up on jobs that relate to the Chinese-speaking world. Union alumni have gone on to professional degrees in international law, medicine and teaching. They also are active in business and finance, government, human rights and tourism.

Here is what some of our alumni have been up to:

We look forward to hearing from you