Did you know that French is unique among the modern languages of the world in its influence on English? Our classes will help you understand its many contributions to world cultures.

French speakers and francophone cultures contribute greatly to our diverse and interconnected world. As we study figures from Rousseau to Sartre, from Hugo to Simone de Beauvoir, from Truffaut to Césaire, you will see that Union offers a variety of French courses tailored for language competency, cultural proficiency and critical thinking.

As a Union College French and Francophone Studies major, you will interact with a talented pool of professors who know your name (in two languages!) and be part of an exciting academic program that encompasses language, culture and literature courses.

From our basic and intermediate language courses to our upper-level courses including a senior project, we examine a broad spectrum of French and francophone topics including women’s and gender studies, theater, literature and cinema. Classes emphasize the importance of global awareness as a key element of 21st century life.

To develop and maintain your linguistic skills and cultural proficiency, you can live with host families abroad and attend film nights on campus. You can participate in French Club activities and French Table, and attend presentations throughout the academic year by renowned speakers, poets, artists and performers. 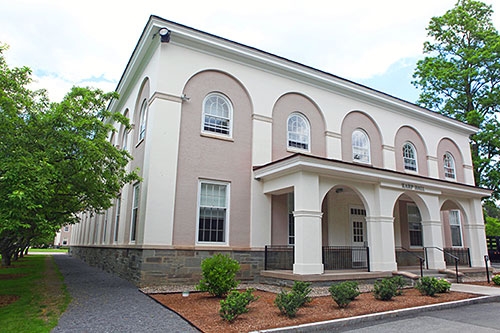 A sampling of courses

Exploration of the cultural, literary and linguistic expressions from the Province of Quebec. Focusing on artistic expression from novels to film, we will explore such themes as colonialism, bilingualism, and culturally informed demonstrations of self-determination and accommodation.

Intensive review and development of all language skills, with emphasis on vocabulary building, conversation, and composition.

What is French Cinema?

This course moves from an introduction to the earliest examples of French and world cinema, to an in-depth study of widely recognized classics of French cinema, considered in chronological order from 1933 to 1985, so as to develop an appreciation for the history, genre and particular theme(s) of each film, as well as its originality.

Knowledge of French is invaluable for international business and law, diplomacy, journalism and many other fields. Here's a look at what some of our alumni have been doing since graduating:

Here is what some of our alumni have been up to:

We look forward to hearing from you