Phil Alden Robinson ’71 recalls WRUC as the place that let him take chances, fail a few times and launch a career.

The film director and screenwriter for Field of Dreams, Sneakers and The Sum of All Fears got his start on WRUC in the Sunday 2 a.m. slot, which he took with the idea that “no one will be listening and I’ll make all my mistakes.”

Mistakes notwithstanding, he did well enough to secure a weekend news gig at WGY radio, which led to a job as a fill-in sports anchor for WRGB TV. His on-air TV break came when he got a call from the station telling him to comb his hair and put on a tie; the sports anchor had broken his arm in a softball game.

In the spring of his freshman year, Robinson joined Bob Killian ’69 and Richard Roth ’70 at the 1968 Indiana presidential primary. To cover the cost of the trip, the trio sold coverage to radio stations all over the eastern seaboard. For $50, each station got four reports daily. (Killian and Roth would go on to successful careers in law and TV news, respectively.) That summer. Robinson and Killian sold coverage from the Democratic convention in Chicago. There, they witnessed a stirring tribute to the recently assassinated presumptive candidate, Robert F. Kennedy. Then, Robinson recalls, “things went south” as protestors were attacked by police and the National Guard.

“I remember standing on Michigan Avenue, looking up and down as far as the eye could see, bumper-to-bumper Army trucks and shoulder-to shoulder national guardsmen with fixed bayonets,” he said. “I remember thinking, this is a major American city and it’s under siege.”

Robinson said he doesn’t recall much about his reports, but he has vivid memories of “cops beating protestors and throwing them into paddy wagons.”

“It was shocking and eye-opening and I think about it now when I open the papers and see federal troops beating up protestors. So much has changed in some ways and so much hasn’t.”

When he graduated from Union with a low draft number, he thought his best option was to join the Air Force where he made training films for “two years, nine months, 14 days, six hours and 23 minutes.”

“I didn’t want to be there, but I enjoyed production and made the best use of my time.”

From there, it was on to Los Angeles to produce educational TV and corporate films, then TV writing, and finally feature films. “One job led to another and I got lucky,” he said.

Looking back at his time at Union, he remembers the late Prof. Robert Sharlet, who taught him to write concisely; the late Prof. Joe Board, who encouraged him to do a documentary film on FDR’s New Deal coalition as a senior thesis; and Prof. Jim Underwood, a great teacher whose friendship has continued for five decades.

“I feel very lucky to have been at a great college that encouraged real creativity and I think of my time at WRUC as just golden. It was so much fun. Every day you got up with an idea and you could just try it. And you could fall on your face and it wasn’t so bad.”

"I spent every waking hour at the station, from doing the Morning Show (7-9 a.m. Monday through Friday), to congregating in the parking lot just before 6 p.m. so we could cram into Charlie Cusimano’s car and hear Dan Ingram’s always entertaining sign-off on WABC as we drove to dinner, to hanging around until we shut the station down at 2 a.m. so we could all go out and get a hot dog and fries. It's amazing our gall bladders survived. Key experiences: covering the 1968 Indiana primary with Dick Roth ’70 and Bob Killian '69, and then the Democratic Convention that summer in Chicago with Bob. But mostly it was the hang, the friendships, the shared love of music, and the sense of belonging to a fraternity of pirates. Irreplaceable."
-Phil Alden Robinson '71 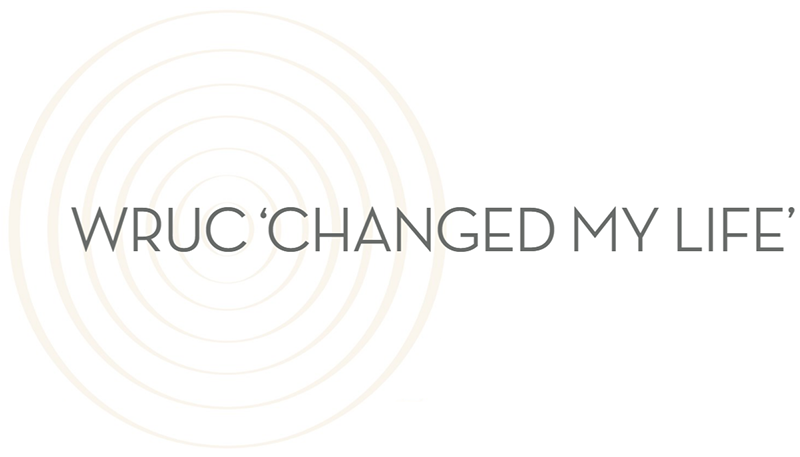