Bodies in motion: Anatomy of a joint biology and dance class 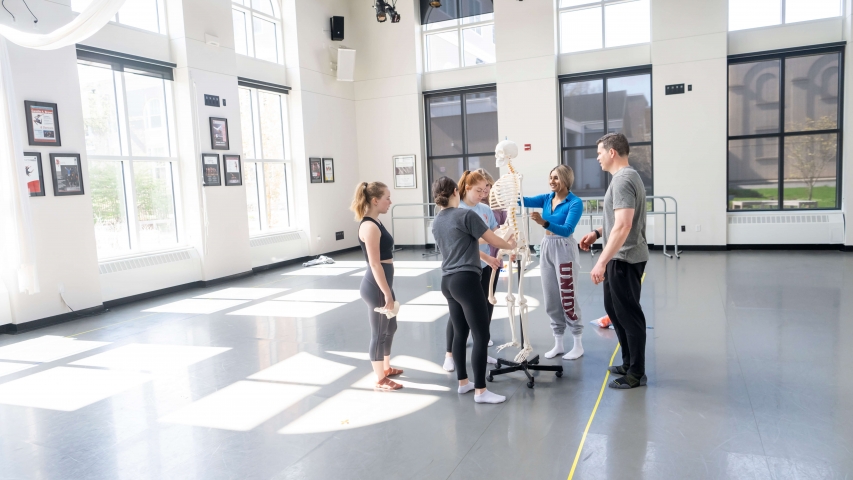 Biology and dance converge in the Henle Dance Studio, where Professor Scott Kirkton discusses anatomy with students in The Science of Human Movement course. 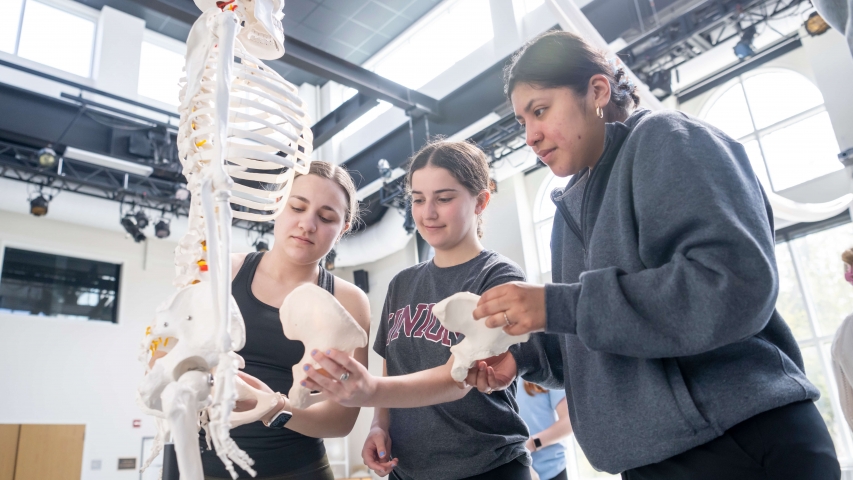 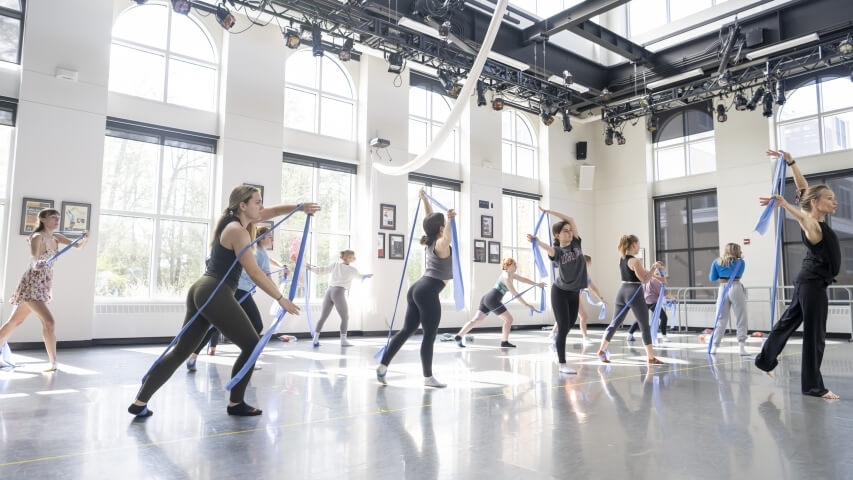 Assistant Director of Dance Laurie Zabele Cawley, at right, shows students how to use resistance bands for physical feedback. 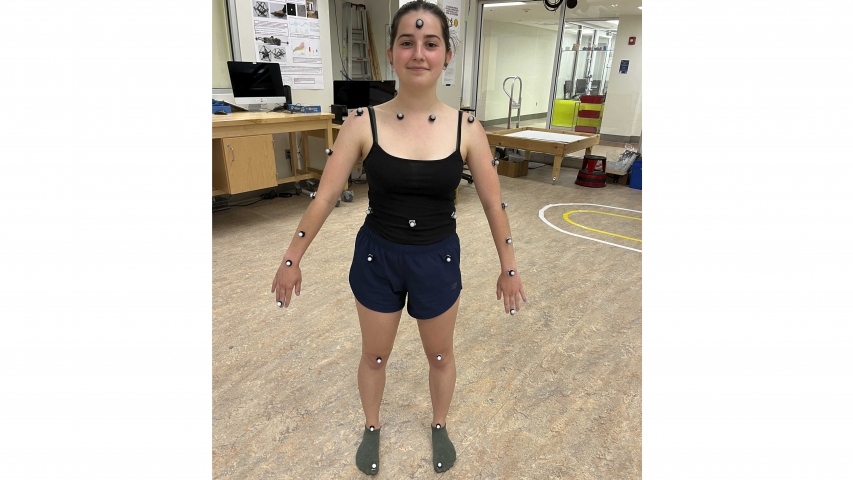 Sarah Dames '24 displays tracking markers on her joints and bones that can be visualized by the motion capture infrared camera system when she performs a movement sequence. 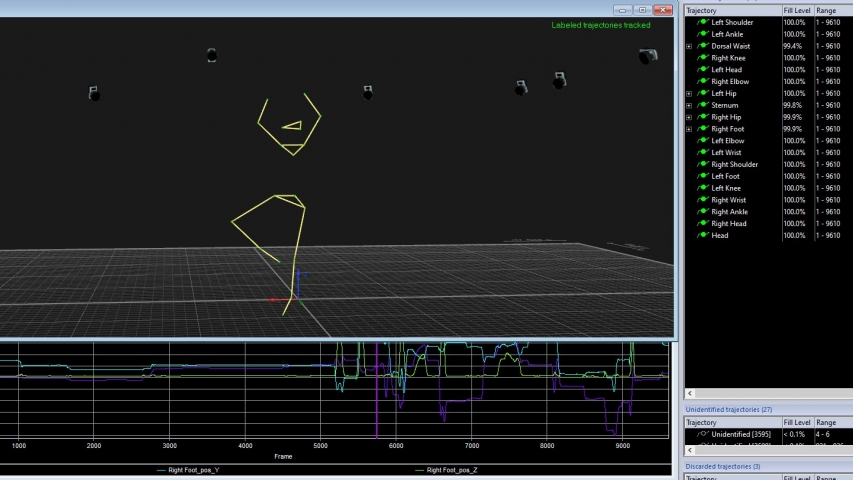 Student movement is digitized and analyzed in the CRoCHET Lab.

“I learned a new bone. It’s called the patella.”

These comments drifted through the Henle Dance Studio on a recent Thursday morning as 12 students gathered around a skeleton model to hone in on the particulars of the musculoskeletal system. Clutching their bone parts, they tried to accurately identify where they belong on the body.

The students are taking The Science of Human Movement course, which brings together Biological Sciences and Theater and Dance, two departments that don’t typically cross paths.

The course aims to give students a way to critically and scientifically evaluate personal movement patterns while also inspiring them to move with a greater understanding of their bodies.

“It’s an exciting and fun challenge to try to communicate the same ideas about the human body from two different academic starting points,” said Scott Kirkton, associate professor of biological sciences, who is co-teaching with Laurie Zabele Cawley, lecturer and assistant director of dance.

Earlier that morning, Cawley led the students through a series of stretching movements focused on how the spine moves. Their blue resistance bands offered physical feedback and a burst of whirling color in the light-filled, mostly white space.

The students in the course represent a wide range of majors. Through a combination of lectures, labs and workshops, they are learning at the intersection of biomechanics, exercise physiology and cognitive neuroscience. The Thursday morning class in the Henle Dance Pavilion is followed by lab work later in the day in the Integrated Science and Engineering Center.

“I appreciate dance and wanted to pair it with something that’s outside the norm for me,” said Zoë Flessas-Finocche ’23, a sociology major from Watertown, Mass., who took the class to fulfill a science with lab requirement.

“I’m a little scared of science. It can sometimes be difficult for me to grasp, but it’s better through this course, which is a crucial bridge. We’re learning anatomy through our bodies, doing exercises that specifically target the spine and give us a hyperawareness of it. Some parts of this class are outside our individual comfort zones, but we all have a shared patience and comradery.”

Cawley first pitched the idea of an experiential GenEd class that would combine dance and science to the Biological Sciences Department in 2018, “hoping for an opportunity to address different learning styles and empower students to embrace science and themselves.” The course’s inception was delayed by COVID-19 until now.

“It has been great working with Scott and being a beneficiary of his years of experience in this field,” Cawley said.

“Laurie has a strong background in kinesiology and biomechanics, and this is a nice marriage of the academic classroom and laboratory with functional movement based on the performance of dance,” said Kirkton.

An animal physiologist, Kirkton joined Union in 2006 and has taught classes in comparative anatomy, human physiology and exercise physiology, among others. His research investigates fundamental questions about how changes during an animal’s life history impact biological processes.

Cawley, who has been leading dance students through their paces at Union since 2010, has an extensive history in performing, choreographing and teaching. Her fields of interest include modern somatic studies, an inquiry into the “lived body” through sensory observation and exploration.

In addition to bringing together the sciences and humanities, Kirkton said the course introduces students who are not in the STEM disciplines to sophisticated instrumentation that might not work with otherwise.

“The lab activities aren’t ‘baby bio,’” he said. “They’re meant to expose students to approaches to learning that they might not get to see in a typical Gen Ed course. Union has all of this amazing equipment. For instance, we have research grade data acquisition systems, force plates and virtual reality software that allows students to visualize the bones, joints and muscles we talk about in class.”

In the CRoCHET Lab (Collaborative Robotics and Computer-Human Empirical Testing) in the Wold Building, he added, the class is using an NSF-funded high speed 3D motion caption system to digitize and analyze the students’ movement sequences.

“We want students to be mindful about their movements and the choices they make. The motion capture analysis will help them better understand these choices.” Kirkton said. “This project will culminate with students submitting a summary paper complete with graphs of their analyzed movements. Then students will present their findings to the class.”

Mary Melo ’22, a political science major with minors in dance and history, has enjoyed the opportunity to pursue her love of dance in a new way.

“I have gained a newfound understanding of dance and the ways in which to use my muscles properly to prevent injury and misuse,” Melo said. “It’s also been enriching to have two professors from different fields of study. This offers students the ability to learn in different mediums using both physical application and more traditional lectures into the classroom.”

“Our goal is for students to connect to their bodies through science and embodied movement, enabling deeper connections they will use beyond the classroom,” Cawley said. “Ultimately, we would love for them to be excited by science and their full potential as human movers.”