This list is merely an example of the types of projects that have been done. Your project may be similar but not identical to any of the examples here. You must discuss ideas for your project with your faculty supervisor.

The eye is an appealing target for therapeutic gene therapies; it is easily accessible and features a minimal immune response compared to other body tissues. In addition, many ocular diseases are very amenable to intervention, giving hope that they can be treated with gene therapy. One such condition is Leber’s congenital amaurosis, which is linked to a mutation in the RPE65 gene. In impacted individuals, a breakdown of the visual cycle leads to the malfunction and death of retinal cells. By injecting a functional copy of the gene, it is possible that vision can be improved or even restored in patients. Development of gene therapies for Leber’s is deceptively simple. Throughout years of research, many complexities regarding gene therapy for Leber’s have become apparent. For example, the injected gene does not always remain exclusively in the desired tissue. Even if the gene is delivered correctly to the retina, gene therapy is not always efficient. This suggests that the transgene is regulated in vivo. Researchers have also struggled to control the expression levels of the injected gene. There has been much work in recent years to address these issues and to develop safe, efficient gene therapies.

“Autumn Leaves” was a piece that combined musical elements of live piano and voice with movement to represent the emotions and motions of autumn. In my first term, I studied dance masters across the ballet/modern discipline to develop my style of movement and in my second term I applied these techniques to create and organize my piece.

The Paradox Of Declining Female Happiness: An Economic Model Explaining Why Women Still Can’t Have it All

Professor Davis and I worked off a paper researched by economists Steveson and Wolfers, titled The Paradox of Declining of Female Happiness, which shows that as women’s rights have increased, their happiness has decreased overall and relative to men. We took their study a few steps further by analyzing this trend by cohort and seeing how different components of happiness (children, marriage, education, job satisfaction, etc.) affect someone’s overall happiness over time.

The Union College Robotics Crew builds robots capable of solving any (solvable) maze of given dimensions. Earlier in the year, the circuitry necessary to solve the maze was designed and laid out on a printed circuit board. The distinctive multi-material printing features of the Stratasys Connex 500 were then harnessed to 3-D print the remainder of the robot’s body. This uniquely constructed robot was then programmed to solve any configuration of a micro-mouse maze through the use of various algorithms. The final product was a robust and versatile robot, designed from scratch, which showed the endless possibilities that can be realized at the intersection of 3-D printing and electrical engineering.

Modeling the Galactic Chemical Evolution of the Milky Way Galaxy

Galaxy evolution generally consists of two components: material distribution and composition. In this project, we examine the material composition as a function of time. To do this, we created a simple stellar birth and death model of the Milky Way Galaxy using Python. Assuming homogeneous mixing, each star drew its composition from the interstellar medium. Upon its death, the elemental yields of each star were determined as a function of mass from Kobayashi et.al (2006). The data, upon completion of the program, will be analyzed to compare elemental abundances as a function of time as well as comparing final elemental fractions to actual observed elemental fractions. If these two measurements agree within acceptable uncertainty, then we can say that our model is simple enough to be understandable but complex enough to capture most of the physics which actually contributes to the galactic chemical evolution. If, however, there is significant deviation between our data and published findings, then we can propose some factors which may be added to account for the discrepancy, and thus produce a new (slightly more complex) model.

Educating the Nation: The Struggle to Implement National Reform of the United States Public Education System

The United States public education system currently stands at a crossroads. The Common Core State Standards Initiative has exposed the shortcomings of the system, and seeks to reform them, but the opposition to the initiative has begun to spread misinformation across the country in a manner that undercuts the very purpose of the reform. Before the United States can rebuild its education system it must educate its constituents on the realities that render the reform effort so essential. The role of policymakers, parents, and educational funding is discussed.

The Psychology of Advertising

Union College first established a Habitat for Humanity chapter in 2013. New organizations like this often have trouble sustaining themselves for an extended period of time, especially in a college setting. This Scholars Project sought to develop a stable foundation for the club on campus and to better understand our student volunteers. The project used four strategies to accomplish this. The first part of this was a research paper that studied in general why college students volunteer. That was then supplemented with an interview study of active club members. In order to make it easier to sustain the club over time, a website was created specifically for the campus chapter. To enhance the connection between the college chapter and Schenectady County affiliates, we publicized and presented data with guest speaker Jeff Clark, Director of the Schenectady County Habitat chapter, and a movie showing. It is hoped these efforts will provide a legacy of materials that future students in the chapter will be able to readily use to keep it flourishing. 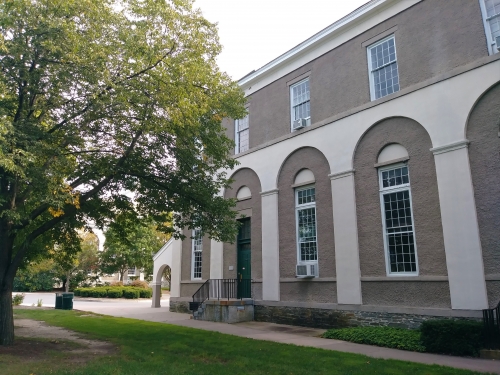