Hiking the High Peaks in the Snow and Ice: The legacy of Kay Flickinger

With fall winding down and colder weather upon us, we often look to winter as a time of indoor projects and staying warm. As a seasonal hiker of the Adirondacks for the last 18 years, I have often been curious about hikers who brave the elements to complete High Peaks during winter.

There is a world of difference between summer and winter mountaineering. What could be a pleasant afternoon in June or July could mean death during a storm in January or February. The Adirondacks have always had harsher weather than much of New York State, and while summer climbing was already popular by the early 20th Century, recreational winter hiking was not accessible to the general public until the 1940s. This was due to insufficient protective gear that was still in experimental stages and the limited security patrols available to rescue lost or injured mountaineers.

From the end of the 19th Century until the 1940s, the High Peaks were only conquered a few at a time during the winter months. Mt. Marcy is said to have been first summited in winter in 1893 by Benjamin Pond and John Otis. Whiteface Mountain was climbed by a group called the Sno Birds in 1904. In 1929, the Adirondack Mountain Club purchased Winter Camp, opening the way for hikers to regularly climb Mt. Marcy from Johns Brook Valley. The Wright Peak Ski Trail was cut in 1938 also providing regular access for skiers. The war years slowed winter recreation activities, but shortly afterward interest in the sport became more popular than ever, thanks to pioneering 46er, Kay Flickinger.

Kay Flickinger was born in Schenectady in 1910, and had a life-long fascination with the Adirondacks. As a member of the Schenectady Chapter of Adirondack Mountain Club (ADK) as well as the YMCA/YWCA’s Otyokwa Club, she regularly took weekend hiking trips, often in the High Peaks. After summiting Allen Mountain on September 7, 1946, she became the 41st member of the 46er Club. At the organization’s first meeting, she was appointed Secretary. By 1958 she had climbed all High Peaks twice. Kay was also the first woman to ascend Mt. Iroquois on skis. “I think climbing the 46 is a delightful game,” she told a Times Union reporter in 1970, “and I’m anxious to see more girls get out this winter.” Following winter ski trips in the Adirondacks, Kay Flickinger and fellow climber Kim Hart each were appointed to the ADK Winter Activities Committee in February of 1948, thus creating even greater opportunities for future generations of hikers to experience winter sports.

As part of her outreach activities, Kay regularly contributed her expertise by sharing information encouraging others to try winter hiking. The first edition of The Adirondack High Peaks and the Forty-sixers included a chapter by Kay entitled, “Climbing on Snow and Ice.” Adirondack themed magazines regularly published Flickinger’s articles about hiking and winter gear. Her article in the December 1949 issue of The Ad-i-ron-dac provides readers a vivid endorsement of the benefits of winter hiking:

“A successful visit to one of the high peaks is an experience well worthwhile, although it requires much careful planning and effort and may very involve a disappointing incomplete trip or two before it is finally attained. Grotesque figures, carved in dazzling white and fringed with icicles, nod and rustle on the slopes at timberline, where in summer, only a tangled mass of gnarled and stubby evergreens resist every effort to pass through them. Higher up, the erstwhile bleak grey rocks are beautiful with frost and ice against an unbelievable blue sky. And on every side wave after wave of snowy ranges, outlined by the purpose shadows of the passes between them, diminish until they melt into the haze at the horizon.”

On a recommendation of the Winter Activities Committee, the 46er Club started awarding annual trophies and badges for proficiency in winter mountaineering. Mostly geared toward college age hikers, the awards sparked a much-needed impetus to develop winter sports in the region. Furthermore, the Winter Activities Weekends that started in 1950, offered less experienced winter mountaineers the advantage of having seasoned guides such as Flickinger accompany them on longer trips.

Focusing on safety and attention to detail to prevent cold exhaustion, Kay regularly led trips in years to come. Changing standards in outfitting due to the needs of hikers, better information, and proliferation of clubs and events, all helped to grow interest in winter hiking thanks to Kay.

“It is the Club’s ambition to speed this reawakening to the beauty of winter woods, and to call the attention of others to the many possibilities for pleasant, interesting routes which may be found in Adirondack Country.”

The Kelly Adirondack Center is showing Kay Flickinger’s outstanding photography in an exhibition running through November 30, 2018. It is entitled, Summits of Forests: The High Peaks Photography of Kay Flickinger and Books of Grace Hudowalski. Click here for more information. 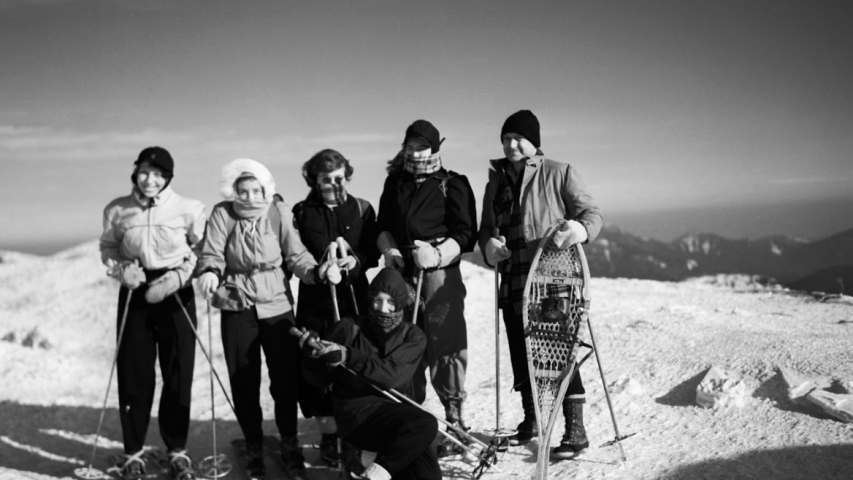 On the summit of Mt. Marcy, 2/12/1949. Kay Flickinger is first on the left. Courtesy of the Adirondack Research Library, Union College, Kay Flickinger Collection (ARL 048). 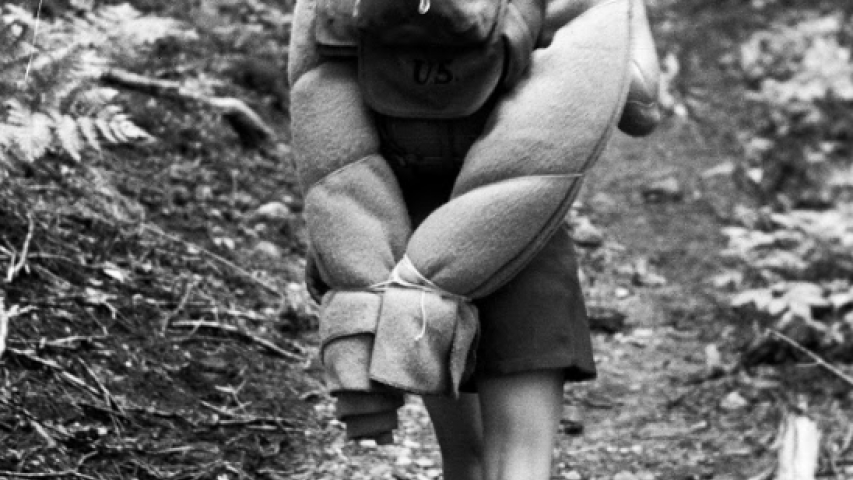 On the Marcy Trail, 1938. Kay was typically the face behind the camera and few portraits of her remain from this time period. Here she is as most in her traveling party would have seen her, forever leading the hike. Courtesy of the Adirondack Research Library, Union College, Kay Flickinger Collection (ARL 048). 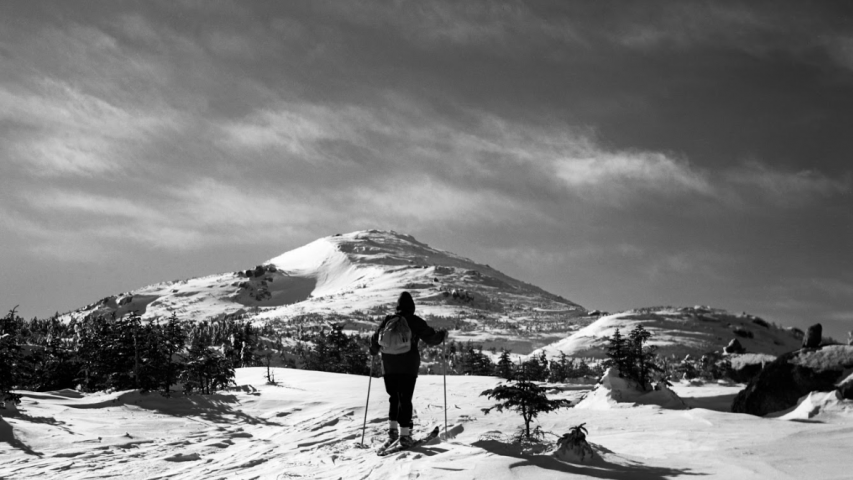 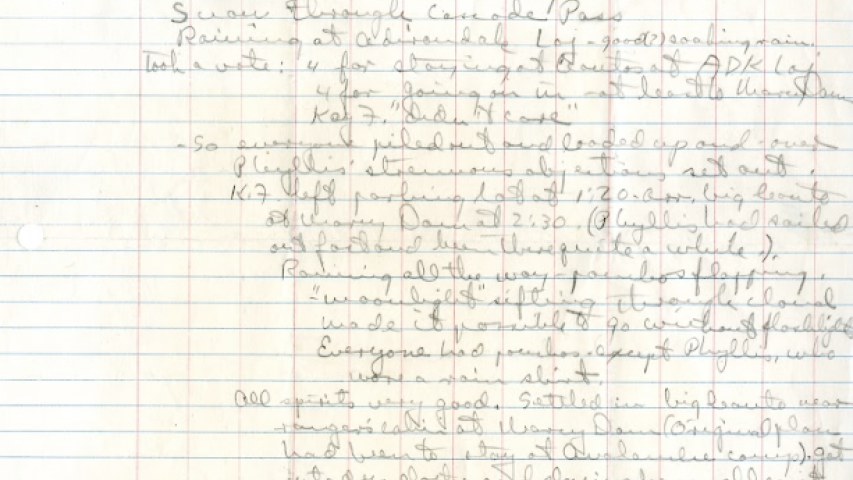